How Sound & Music Play an Important Role in Retail Environments

Many business owners ignore the impact music has on consumer behavior and make music selections based on personal preference. But science has shown that music is much more than a pleasant background attribute – music has a powerful affect on how humans behave & perceive the world around them. It also has “magnetic” properties that can attract (or repel) consumer attention & thus impact a business’s bottom line.

Our Brains are Wired for Music

By harnessing the power of the brain, marketers are using music and science to create more sales opportunities, optimize the customer’s retail experience and enhance brand identity.

Consider this – because it only takes seconds for the brain to “tune-in” to music in new environments, a customer entering a store will decide in seconds whether to explore further or exit – their initial “audio-impression” can make a huge impact in that decision. Unhappy customers vote with their feet, and like elephants, will retain an unpleasant experience and carry it into future consumer decisions. That’s why investing in a professional sound system (designed by a pro if possible) and choosing the right music can translate to better sales performance.

Researchers have identified three qualities of music that can influence the buying behavior of consumers – Volume, tempo and genre. We’ll cover those in a minute, but first consider some of the research that is driving this trend towards audio excellence in retail.

Below are just a few studies on music & consumer behavior taken from the National Restaurant Association’s website:

A recent CNN article showed that people chewed food nearly a third faster when listening to high-volume, fast-tempo music, potentially increasing table turnover. Also according to CNN, a French study observed that as decibel levels increased, men not only consumed more drinks but also finished each drink in less time.

A study published by the Journal of Culinary Science & Technology determined that food tastes best to diners when 1) classical music is softly played, and 2) there’s the presence of subtle background “chatter.” The same study showed that the absence of music detracted significantly from the dining experience, with patrons describing something as innocuous as the “clink” of cutlery as unacceptably noisy. Music, of course, serves to mask such noise.

A Scottish study published by the Association for Consumer Research found that diners increased their expenditures by 23 percent when slow-tempo music was played. Most of the additional spending went toward the drink bill, which grew 51 percent. Because drinks are typically a high-margin item, the increase in profits was especially significant. 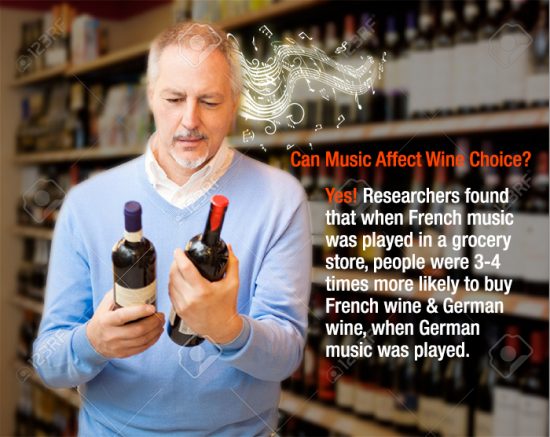 In 1999, a study done by Adrian North and colleagues from the University of Leicester, tested whether music affected the way consumers made decisions or if it impacted how they perceived a sample. What they found was very interesting ” [ callout from study ]”.

“They played traditional French (accordion music) or traditional German (a Bierkeller brass band – oompah music) music at customers and watched the sales of wine from their experimental wine shelves, which contained French and German wine matched for price and flavour. On French music days 77% of the wine sold was French, on German music days 73% was German – in other words, if you took some wine off their shelves you were 3 or 4 times more likely to choose a wine that matched the music than wine that didn’t match the music.

Did people notice the music? Probably in a vague sort of way. But only 1 out of 44 customers who agreed to answer some questions at the checkout spontaneously mentioned it as the reason they bought the wine. When asked specifically if they thought that the music affected their choice 86% said that it didn’t. The behavioural influence of the music was massive, but the customers didn’t notice or believe that it was affecting them. Similar experiments have shown that classical music can make people buy more expensive wine [2], or spend more in restaurants.”

Volume
A field experiment conducted by Smith & Curnow (1966) showed music directly impacted the amount of time customers spent in stores. Loud music sent them to the door faster – which translates to less total time shopping. Though the results showed no significant affect on sales the a negative experience can have a negative impact on your brand. Yalch and Spangenberg (1988) found that the customer’s age can moderate some of the effect of volume. In addition, other studies have indicated that the volume of music can impact our perception of time too.

Genre
In another wine store study, researchers found that playing classical music led to more money spent in the store. The results indicated the sales volume remained the same however, the customers chose more expensive bottles of wine compared to other types of music being played. Music can also trigger seasonal purchases. Studies have shown that Christmas music led to the increase in holiday-related merchandise sales. That is why learning the music in retail environments can open other opportunities to boost sales and help define your brand.

But even the right music will only be as effective as the audio system that delivers it. That’s where Taylor professionals can help. We can help you design & create the perfect audio environment to deliver a positive engaging experience for your customers that will earn their loyalty.