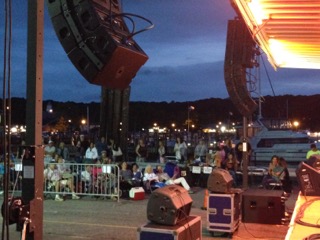 New York, NY – March 2016… In the City that Never Sleeps, concerts and other events are almost a daily occurrence. For concert sound providers, the busy summer season means rarely a dull moment. Long Island-based Taylor Productions is one company taking advantage of that thriving market, with the veteran sound, lighting, and staging company lending their multiple Renkus-Heinz rigs to a full roster of concerts, festivals, and other events.

“We’ve had an exceptionally busy summer this year – we were outside five to six days a week,” observes Taylor Productions President Bill Taylor, whose staff has covered gigs ranging from Phil Collins to Jay and the Americans at medium to large venues including Lincoln Center, the Rainbow Room, MetLife Stadium, and Nassau Coliseum. And, Taylor adds, “we give them a system that really shines and gets the crowd moving.”

Taylor’s main rig, a powerful Renkus-Heinz PNX102LA line array system, has seen almost daily action over the summer, as have their multiple other PNX and CFX-Series rigs. “We did a large street fair on Long Island recently, and it was essentially us versus ourselves – we had our PNX102 rig on one stage, and a CFX101 rig on the other stage at the other end of the street. Fortunately, both systems offer great pattern control, so we were able to keep things reasonably separate.”

With several Renkus-Heinz systems to work with, Taylor Productions are able to mix and match cabinets to meet the demands of events both large and small. “We’ll pull out the PNX102 rig if the venue is large enough, because I just love the sound of that system,” Taylor offers. “Often for more mid-sized venues we’ll set up a nice CFX101 system – it’s plenty loud enough, and sounds wonderful. If we’re doing a smaller gig like an outdoor cocktail party or a jazz fest — something that requires great fidelity without a whole lot of sound pressure — our PNX82 rig is a perfect fit. I love the fact that you can rotate the horns if you want to. Having that kind of pattern control is essential for outdoor shows where you need to maintain control of sound levels in the neighborhood.”

Taylor’s smaller systems also come in handy to augment the mains in larger shows. “Often we’ll use our PNX82s as front fill for a theater or concert show,” says Taylor. “They’re really great for that kind of coverage. Being able to rotate the horn means a much softer sound – not in your face like a lot of other speakers. If we want tighter control on the bottom end we’ll use our DNX212 subwoofers. They deliver such a tight, punchy low end, with a nice long throw.”

Though the summer season has given way to autumn, Taylor Productions’ calendar shows little sign of slowing down, and their Renkus-Heinz systems are booked for indoor gigs well into the future. “We’re fortunate to be very busy, and it’s great to know we’ve got systems we can count on, day in and day out. Our Renkus-Heinz systems are well-built and dependable, and they sound great. They really take our sound to a whole other level.”